It Is Not Good, It Is Not Bad, It Is What It Is – No Judgment

Home/Attitudes/It Is Not Good, It Is Not Bad, It Is What It Is – No Judgment
Previous Next

It Is Not Good, It Is Not Bad, It Is What It Is – No Judgment 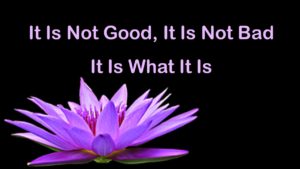 One of the pillars of mindfulness is an attitude of no judgment. You become a dispassionate observer of all that happens in life; watching intently without judgment. You allow things to happen as they do without adding a running commentary.

Everything which arises, just arises. You don’t judge it to be either good or bad. You allow it to be what it is.

It was my mantra today when I ran a leadership workshop in a school for some Grade six children. I had previously asked the school whether any of the children were allergic to eggs. When I didn’t receive a reply, I assumed that meant nobody had an allergy. I arrived for the leadership workshop with a pile of raw eggs and a challenge for the children to drop them from a height of 3 metres onto the ground without them breaking. It was neither good, nor bad, but it turned out that three of the children suffer severe anaphylaxis with raw eggs, including touching them and eating them.

When I found that out, I could have gone into judgment and panicked about it being a bad thing that the school forgot to tell me after I specifically asked and that I now had three children who could have a severe reaction if they even touched the four dozen eggs that I had brought along. This would have sent my brain into stress and I would have begun either the fight or the flight mode. Neither of which is good for problem solving and decision making.

Instead I reminded myself that things are neither good nor bad, they just are what they are. I had a one hour activity planned which used raw eggs. What could I either do instead or modify to keep these children safe? There was no point in beginning a running commentary inside my head about anything other than what the options were and which one was the safest for me to choose.

The attitude of no judgment served me well today as it has done every day of my life for years.