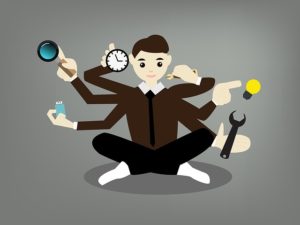 The secret to greater productivity and enjoyment while you work is to stop multi-tasking, especially if you think you are good at it.

Researchers at Stanford University were set the task of finding and documenting the benefits of multi-tasking. Despite years of trying, they were unable to find even one benefit. Instead they made some disturbing discoveries.

Researchers found that if you attempt to multi-task two tasks at the same time, it will take you 50% longer than if you did them one after the other. Participants in a University of Michigan study were asked to write a report and check email at the same time (not an uncommon practice in a work environment). They took one and a half times longer to finish than individuals who did the same two tasks one after the other.[i]

Multitasking is unproductive, stressful and most concerning of all, it is addictive. [iii] Russell Poldrack fears that multitasking may even creating a generation of people who are easily distracted, cannot think clearly, whose memory is disorganised[iv] and who are not as good at analytic reasoning or creative thinking.

Multi-tasking is enjoyable and addictive because each time you switch tasks your brain gives you a squirt of dopamine. This follows the same neural pathways as addictive drugs. [v]  In fact, Australians are so addicted to multi-tasking that more than 88% use their smartphones on public transport, at work (92%), while watching TV (83%) and even when talking with friends (88%).[vi]

The Answer Lies In Your One Track Mind

If multi-tasking isn’t the answer to getting more done, what is? The answer lies with doing what your brain does best. With the exception of physical activity such as walking or eating, researchers have found that your brain simply cannot do two things at once.[vii]  If you try to multi-task, it will help you out by switching between tasks as rapidly as it can.

Unfortunately this chews up time and energy. Your brain has to constantly monitor when to change tasks, turn rules on and off each time a task is swapped and remember where it was up to. [viii] Each time you switch task you lose one to two seconds[ix] (more if you are older or if you are a heavy multi-tasker[x]), chew up large amounts of mental energy and release stress hormones into your body.

“For the most part, we simply can’t focus on more than one thing at a time. What we can do is shift our focus from one thing to the next with astonishing speed. Switching from task to task, you think you’re actually paying attention to everything around you at the same time when in fact you’re not,” said Earl Miller, a Professor of Neuroscience at MIT.

While you feel you are getting more done when you multi task, it is like spinning wheels in a car that only has first gear. You look very busy, but you may not be very productive.[xi]

The Simple Solution To Greater Productivity

Multi-tasking doesn’t work. The key to achieving more and coping better while you do is to focus on one task at a time and wisely choose which task that is. Mindfulness can help you to do this. Some of the world’s largest and most innovative companies and universities are using mindfulness training to help people cope and stay focused in challenging work environments.

At its most basic level mindfulness means paying attention to one thing at a time. It is practised by sitting quietly and focusing on one thing. That one thing could be breathing. Every time your mind wanders from your breath, you bring it back and regain your focus. Eventually this training carries through into every moment of your working day so you are able to focus and concentrate on one thing at a time in a more productive way.

The mindfulness training strengthens the neural pathways associated with focus in your brain. You can begin by doing your training while your laptop boots up in the morning. Sarah Lazar, a research scientist at Massachusetts General Hospital, showed that the grey matter of men and women who did this training was thicker than that of people who did not.

If you’re not yet ready for a mindfulness program and all its benefits, you can still experience increases in productivity if you: